Bribery and corruption can be considered a deadly cancer which has penetrated deep into the institutional system of Sri Lanka, draining its essence and rendering the country hapless. The magnitude of the growth of bribery and corruption in Sri Lanka can be considered as an ugly and destructive epidemic created and nurtured by the rulers of the country from 1977, rather than a phenomenon that occurred naturally and spontaneously.

Bribery and corruption was the -repeated and debated topic during the 2015 presidential election. The anti-Mahinda theoreticians in their analyses painted a dismal picture of Mahinda Rajapaksa to the country as the first Head of the State who had introduced grand-scale corruption to the country. 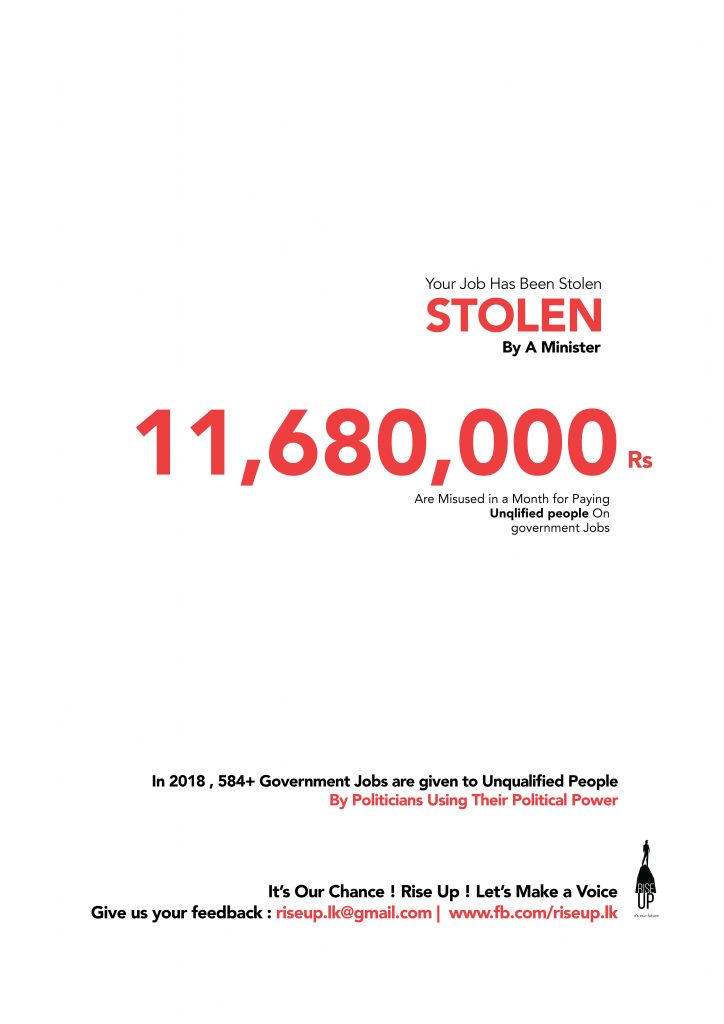 As a result, the people tended to perceive the predecessors of Mahinda Rajapaksa as very clean and good leaders. Even though the regime of Mahinda Rajapaksa can be considered a period in which bribery and corruption reached a maximum height, it was indeed President J.R. Jayewardene who introduced large-scale corruption to the country at State level.

According to the available information, there are three main types of corruption prevalent in Sri Lanka:

–  Aiding and Abetting preferred or illicit businesses in exchange of monetary or other benefits.

–  Misuse of public funds for personal or political purposes.

This category is about both politicians and public officials at the national, provincial or local level. They seek monetary rewards (bribes) for services render or to overlook official sanctions/duties, taxes etc. Bribes for public appointments by politicians is one form. Approval of contracts, including foreign deals, can be another. Even without bribes, if appointments (i.e. foreign service, official positions, consultants etc.) or contracts are awarded without merit, it is corruption. Customs and Inland Revenue are two places where major corruption might prevail at the public servants’ level.

This is about politicians or officials assisting preferred or illicit businesses in seeking monetary or other rewards. The complicity in these activities can be direct or in the form of policy waver, de-regulation and information leaking. The recent bond scam as well as the former PM allegedly issuing a letter to the customs on behalf of a drug trafficker can be in this category. A direct involvement was when a deputy minister after 1977 was arrested for attempting to smuggle gold bars misusing his official status.

Presidential system and large cabinets are major reasons for the waste and misuse of public funds. This is further to bribery. President’s office is expensive and prone to misuse. Whether this has significantly changed is yet to be seen. Ministers and deputies employ family and friends as entourage. Expenses on and misuse of luxury vehicles, fuel, security and travel expenses are colossal. There is no clear demarcation between official work and party work. Some of the perks go even to the opposition members of parliament. This appears a collective swindling of public funds.

Whatever criteria you use to compare the early independence period and the present-day politics, the degeneration is quite marked (from +2 to -6) on all fronts. Presidential system or authoritarianism is at the centre of this degeneration as the President’s usually protects (if not directly indulge in!) the perpetrators. This can be the same under an Executive Prime Ministerial system. Past President’s allegedly kept files (JR and MR) to politically control the perpetrators, without taking action against them.

Politicians wanted colossal amounts of money to contest districts (not wards) under the new electoral (preferential) system. The same goes for the presidential candidates. This has created a close nexus between politicians and dubious business dealers.

Politicians today are not the calibre of people that the country had seen early after independence or before. This is not an isolated result, but part and parcel of a degeneration of the political party system. Interests of the leaders and their financial backers have become predominant than the party members or the supporters. Party organizers are mostly thugs, almost by necessity. Party policies and programmes have taken a backstage.

When they have power and authority they are doing various things to gain the votes and the attraction of the people. In Recent years ministers given the government jobs to the people who served them in the elections. But they don’t qualified for the job. Because of that so many opportunities are gonna lost for the qualified people who does not have a job.

Other than the opportunity lost government lost nearly over 20M rupees per year for the as the salary for these unqualified people. This corruption was frequently done by the Rajapaksha regime. But it’s reduced in the Sirisena government. But it’s not over yet. [ Source : Transparency Sri Lanka ]

Youth Unemployment Rate in Sri Lanka increased to 20 percent in the second quarter of 2019 from 21.60 percent in the first quarter of 2019. Youth Unemployment Rate in Sri Lanka averaged 24.61 percent from 1992 until 2019.Because of some reason youth do not get proper career guidance. So they are searching for wrong Paths to get jobs.

In Sri Lanka, after the Sri Lanka Police , Political Parties And the Ministers are the most corrupted institutions in the country. So those ministers use their power and authority to give government jobs to the unqualified persons while even changing the job seekers educational certificates.

In history there is just only one record about the punishment against this corruption. It was Albert Silva, a UNP candidate elected to Galle constituency in 1977. He lost his parliamentary seat by a Court giving jobs to his supporters in wrong way.

There are over 15 000 unemployed graduates in Sri Lanka. The ministers grabbing their opportunity by giving their chance to another person using their power.

Why Political Parties Doing this?

As the situation stands, the war against corruption seems to be directly counter-acted by ruling elites in which their existence depend upon corruption as a mechanism of wealth extraction and upon corrupt officials as the basis for political support. To stop this corruption, as of my strategy there  are two target audiences

They are the ones who search the jobs in the wrong way. They are not much educated maybe because of this they did not get proper career guidance. They tend to find things in the wrong way. Politician uses them to do their works in election times by saying they are going to give jobs when candidates get the power.

Main Characteristic of this youth is they are willing to do something to get the job. As an example they are working in the election offices the are going canvassing. Actually, they are not lazy. So that’s the key point to the target in my campaign.

They have some knowledge about this corrupted system they have the vision about this country. So we can easily influence them. They already know the corruption happening in society.

I already mentioned, the unemployed and uneducated youth tends to find jobs in the wrong way because they don’t get a chance to get proper career guidance.

But this audience has a proper job and career guidance are more radical and they want to do a change in the current system. So that point is the key point that im going to use on this audience.